Staying dry is probably the last thing you would expect when scuba diving.  However, it is entirely possible, and absolutely necessary in cold water, thanks to the drysuit.

Drysuits often have a reputation for being uncomfortable and difficult to get in to and out of.  This can be true to begin with; you need to get the hang of it, and every drysuit is different.  I am going to go through some of the more common drysuit configurations, and talk about the pros and cons of each, as well as some tips and tricks for getting in and out of them!

There are two main constructions of drysuit: trilaminate and neoprene.  They each have their benefits and drawbacks.

Trilaminate drysuits are generally lighter and have more flexibility than neoprene drysuits, although they also tend to be more expensive.  They often come with latex seals, and many can optionally use neoprene or silicone, user-changeable seals too.  Trilaminate drysuits do not offer much in the way of thermal protection; diving in cold water means that you need to wear thick, thermal undergarments to keep warm.  This can be both a blessing and a curse; it allows you to be more flexible, and layer appropriately for different environments; it also means that you have to carry and wear extra undergarments, often bulky and limiting movement.  Many trilaminate drysuits also have the option of changeable boots, which can be useful for different diving conditions and when selling on a used drysuit. 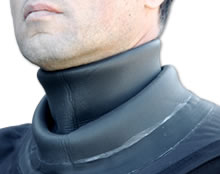 Neoprene drysuits tend to be heavier than trilaminate drysuits, but are often more affordable and more durable.  The majority of neoprene drysuits have neoprene seals which many divers feel are more comfortable and durable, but can stretch out of shape over time.  They often provide a reasonable amount of thermal protection as well; the neoprene used in their manufacture is crushed, reducing its thermal properties compared to a wetsuit of equivalent thickness.  However, the neoprene material provides enough thermal protection that you only need to wear thin thermal undergarments, even in cold water.  The neoprene construction has the disadvantage of being quite stiff however, and can reduce mobility whilst wearing the suit.  Most neoprene drysuits have built in boots, which can make them less flexible for different diving conditions, and also more difficult to sell on when no longer needed.

Drysuit diving, although a bit cumbersome at first, opens up a whole plethora of new dive sites and experiences.  It also allows you to extend the dive season, especially somewhere like the UK!

PS: Oyster Diving are doing a great promotion for the Aqua Lung Fusion range of drysuits (which are neoprene-trilaminate hybrids, the best of both worlds!) where you get a free undersuit worth almost £300!  Check it out!