The SS Thistlegorm, one of the most famous wreck dives in the Red Sea, due to the amount of varied cargo that she was carrying when she was sunk.  We dived the Thistlegorm on the 74th anniversary of her sinking, which made for an eerie atmosphere as we dived.

On the 6th October 1941, the SS Thistlegorm, carrying a large cargo of train engines, trucks, motorcycles, armoured vehicles and weaponry, was sunk after being bombed by the German Luftwaffe.  The resulting explosion left the cargo scattered across the sea bed, and the ship’s cargo holds blown open. 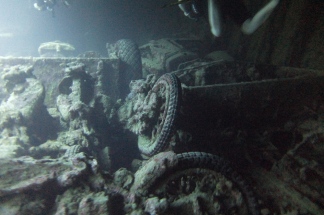 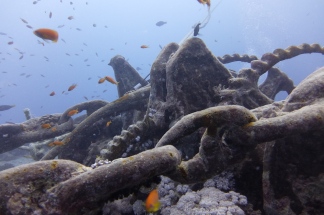 This ghostly image is actually Rae passing me whilst taking a photo in low light!!

We kept to the exterior for our first dive on the Thistlegorm, going to the deepest part of the wreck at nearly 30m.  Getting our first glimpse of a stonefish on the deck, we moved around the ship, along the eerie passageways and peering into the cabins as we passed.  Looking down into the cargo holds, you could see the volume of cargo that was carried, and  just how well it has been preserved in the depths.  The heat of the explosion that sunk here was also visible by the rifles and other weaponry which had melted together into large clumps.

I took the camera down on our second dive on the Thistlegorm, when we penetrated the cargo holds.  Unfortunately, I’m not used to shooting in such dark conditions, and only had the internal flash on the camera for any kind of lighting.  This means my pictures from inside the wreck kinda suck.  Oh well, it just means we need to go again after some practice!  The preservation of some of the artefacts on the wreck make for a very eerie dive; seeing pairs of boots lying just inside the blasted hull of the ship make you shiver slightly.