Small Crack (hee, hee!) was quite a tough dive; although it was fairly shallow, we faced a strong current towards the end of the dive.  This was the first zodiac dive of the trip too, which was a new experience for us.  Due to the mixture of groups and size of zodiacs, Rae and I went to the dive site on separate boats.  Performing a negative-entry by rolling backwards off of the side of the zodiac, we dropped to about 5m before finding each other.  I went in first, and was hoping to get a shot of Rae entering the water, but was a little too late, and a little too far away; definitely one for another time though!

Onto the diving then; we followed a reef wall to our left, swimming in and around coral outcrops with the sand stretching off and sloping down away from the reef.  We found numerous blue-spotted ray and moray eels here, as well as the usual suspects of anthias, goatfish, anemone fish and hard and soft corals. 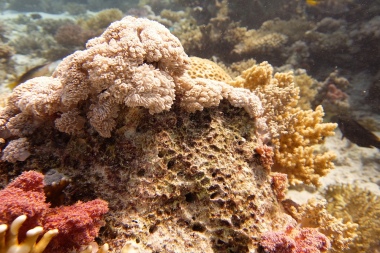 The site is called small crack because of a small pathway (or crack) in the reef wall which leads to a secluded shallow lagoon, which is where the liveaboard boat was moored.  This crack in the reef wall means that currents build up and flow between the lagoon and the sea; these currents change frequently, so that you can be lucky and have it push you through the crack, or be unlucky and have to fight it all the way into the lagoon.  Unfortunately for us, when we started the dive, the current was flowing into the lagoon, but by the time we reached the crack, it was flowing the other way.  This current allows the corals in the channel to flourish, with sea fans and other corals catching morsels as they are pushed past them.

After a hard swim against the current, we eventually ended up in a shallow sandy lagoon, and set off to find the boat.  About 20m out from the boat, we ran low on air, so performed our safety stop, deployed our SMB (surface-marker-buoy) and surfaced.  Although we could have made a surface swim, one of the zodiacs came by and dropped us a line to tow us the short distance back to the boat, which was good fun and much appreciated after our tiring swim!

All in all, a fun dive with some lessons learnt about negative entries and swimming against currents.